Safaricom will charge customers 3.5 percent of the value of their online purchases made using the newly introduced virtual card it has launched in partnership with global payments firm Visa. The two firms inked a deal to form the  M-Pesa Global Pay Visa Virtual Card allowing users to shop and pay for services in more than 200 countries.

Safaricom has said the charges will be on the value of the transaction based on the exchange rate at the time of the transaction, with the shilling currently trading at an average of 117 units to the US dollar. “You will not be charged to make payments for online purchases as there is no transaction cost. However, Safaricom will apply markup of 3.5 percent on the transaction value at the prevailing forex rate,” the telco says in a notice.

A person buying an item worth Sh10,000, for instance, will be charged a markup of Sh350 for using the service. Customers can use the platform to pay only international online merchants such as Netflix, Amazon and AliExpress. Those buying from local online stores such as Jumia will be directed to pay using the Lipa na M-Pesa option. In case of a reversal made on the transaction, Safaricom will reverse the total amount back to the customer less the 3.5 percent, which it will keep as a foreign exchange markup fee. 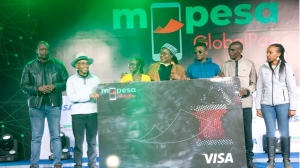 The deal is expected to boost Safaricom’s earnings from e-commerce payments at a time when M-Pesa revenues have been growing steadily. Safaricom earned Sh107.69 billion in M-Pesa revenues in the year ended March, a 30.3 percent growth from Sh82.56 billion in the period to March 2021.

Kenya is positioned at 54 in the ranking of e-commerce markets with revenue of Sh234 billion ($2 billion) in 2021 on purchases from foreign and local stores, according to market intelligence firm ecommerceDB. The virtual card will allow over 30 million M-Pesa users to pay up to Sh150,000 per transaction and Sh300,000 per day.

The service does not allow the use of M-Pesa’s overdraft service, Fuliza, which enables customers to send money or complete payments through the Lipa Na M-Pesa option even without enough money in their accounts. US-based electronic payment service provider Visa is also targeting to grow its revenue and market share at a time when mobile money transactions have become more popular in personal as well as business payments.