One year after the take-off of the African Continental Free Trade Agreement (AfCFTA), no fewer than 28 banks in Africa joined the Pan-African Payment and Settlement System (PAPSS), which took off with a $500m facility with an additional 24 banks on the waiting list.

PAPSS is a creation of the African Export-Import Bank (Afreximbank) to facilitate intra-African trades through the  settlement of transactions in local currencies in the light of the AfCFTA take-off. Daily Trust reports that there are over 40 different currencies in the African continent and over time many traders within the continent would be demanding for payment in foreign currencies, especially dollars.

Speaking at a breakfast meeting tagged, “One year of AfCFTA: Opportunities, challenges and the Nigerian-American partnership” organised by the Nigerian American Chamber of Commerce (NACC) in Lagos, the Chief Executive Officer of PAPSS, Mr Mike Ogbalu said the hunger for third party global currency is destroying African currencies. 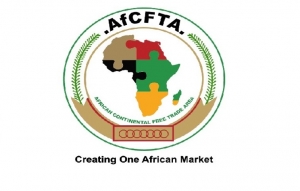 This was why Afreximbank created the PAPSS, which would enable African traders to transact businesses in local currencies, he said. The pilot scheme of the payment system took off with $500m in West Africa while 28 banks
have so far joined the platform even as 24 others are on the verge of signing into the platform.

Ogbalu disclosed that the target is to bring the over 500 banks in Africa on board while there are plans by the Afreximbank to increase the contribution to $3bn as soon as the pilot scheme in West Africa completes. He explained that West Africa was chosen as a pilot region because it “has the same complexity that we expect to see in the African continent,” saying it is a multi-currency zone, multi-language; five English-speaking countries and one

Francophone and there are 60 French regulators in that zone. Former Director-General of the Nigerian Association of Chamber of Commerce, Industries, Mines and Agriculture (NACCIMA), Mr. John Isemede described Afreximbank’s initiative as laudable because out of 44 currencies in Africa, only one is convertible. He however expressed concern that Nigeria signed the AfCFTA pact without any structure on ground, stressing that over 600 agreements have been signed by Nigeria since independence without success.