The delegates urged governments to facilitate and provide a supportive environment for trading in coffee through good policies, extension services, certification of inputs, transport infrastructure and removal of trade barriers.

Drawn from 25 African countries, the participants called for harmonization of legislation, policies and quality standards to boost trade in coffee. Solomon Rutega, Secretary-General of the Inter African Coffee Organization (IACO) called on regional blocs to lead the process of harmonization of policies, processes, and standards to help
support regional trade and improve efficiency.

“The business-as-usual approach that has failed us must come to an end as we race towards increasing coffee production that has been dwindling over the last two decades,” Rutega said. He said the coffee sub-sector requires concerted efforts such as the provision of financial facilities and formation of task forces in all countries in order to revive the crop and make it competitive in the local and regional markets. Rutega observed that with value addition, increased domestic consumption and intra-Africa trade, the coffee sub-sector is capable of unlocking growth in the continent. 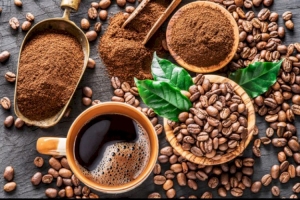 Kawuma added that farmers must also explore partnerships with manufacturers to break the technological barriers to support investments in the transformation of the coffee value chain in Africa as well as promotion of consumption of coffee grown in the continent.
Francis Owino, Principal Secretary in Kenya’s State Department for Crops Development andAgricultural Research urged African coffee-growing countries to strive to sell their commodity after adding value to it in order to attract better prices in the international market.
Delegates noted that aligning coffee with the seven aspirations and goals set out by the AU Agenda 2063 will lead to the expansion of coffee trading regionally under the African Continental Free Trade Area (AfCFTA) framework.

The delegates further observed that AfCFTA provides economic integration and promotion of agricultural development, food security, industrialization and structural economic transformation that stands to promote growing and consumption of coffee.

In addition, the summit noted that anchoring coffee into the AU transformation agenda will go a long way toward unlocking the much-needed resources for the revitalization of the coffee industry in Africa.