The Economic Commission for Africa (ECA) on Sunday, May 15, launched the first-ever comprehensive tool that measures how easy, or hard, it is to do business between African countries.

The AfCFTA Country Business Index (ACBI) has three key objectives including assessing the perceived impact of the African Continental Free Trade Area on the private sector’s ability to trade and invest across African borders once the Area is operational.

The idea that started in 2018 focuses explicitly on the constraints and challenges faced by private businesses, said Stephen Karingi, Director of the Regional Integration and Trade Division of UNECA. Its launch was done in a side event during the 54th session of the Economic Commission for Africa (ECA) Conference of Ministers in Dakar, Senegal.
“It will be used to identify key challenges that the private sector faces in its cross-border activities,” he said. As noted, the tool focuses on African integration by targeting businesses based in and trading across African countries.

The UN Under-Secretary-General and Executive Secretary of the Economic Commission for Africa, Vera Songwe, said the ACBI “is yet another measurement infrastructure” that will help assess the extent to which broader developments related to integration and trade are implemented; as well as understand the business sector’s perceptions of trading under free trade agreements already in force in African countries. 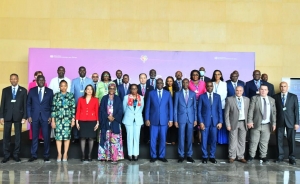 Vera Songwe, the UN Under-Secretary-General and Executive Secretary of the Economic Commission for Africa, speaks at the 54th session of the ECA Conference of Ministers in Dakar. It is not a measure of what a particular country is doing but a measure of how easy it is for someone in one country to set up a business in another country, Songwe said.

The Index aims to look at how easy it is to do business between African countries, to trade among each other and how easy it is for a Cameroonian, for example, to set up business in Kenya and vice versa. It will help identify bottlenecks and address issues so that the African private sector can conduct business as seamlessly in their country of origin as anywhere else on the continent Following the launch of the Index in 2018, experts began piloting and refining it as a tool to measure and compare the views of businesses across Africa on the implementation of the Area.
After phase one, in Cameroon and Zambia, the methodology was refined.

Surveys were conducted in seven more countries: Angola, Côte d’Ivoire, Gabon, Kenya, Namibia, Nigeria and South Africa. Karingi said they now target to cover 13 countries by July. A report with results from the second phase of the roll-out was presented on Sunday. As found out, among others, Karingi noted, cross-border trade is more challenging for female-owned firms, something that policymakers need to pay attention to and help fix.

In the third phase, the new tool will be rolled out in DR Congo, Egypt, Morocco, Rwanda, Senegal and Tunisia.The Index differs from other integration indices, since it is informed entirely by private-sector perceptions, not by secondary data, making it truly representative of African business.

Prudence Sebahizi, the chief technical adviser on AfCFTA, requested the Economic Commission for Africa to enhance the new tool such that it can, in future, also able to measure or assess the status of rules and regulations that impact on trade “and what interventions can be made to improve trade performance.”

“My point is: the ACBI has provided outcomes of national consultations based on private sector perceptions. However, no concrete reasons for such perceptions are provided nor actions proposed to improve the perceptions,” Sebahizi later told The New Times.

The AfCFTA Secretariat is planning to undertake AfCFTA Trade Policy Reviews that will assess the status of national trade-related policies that affect the implementation of AfCFTA and propose concrete reforms to be undertaken to improve the situation.

The agreement establishing the AfCFTA officially became operational in 2021. The objectives of the Area are to create a single, continent-wide market and to enhance competitiveness at the enterprise level.

Progress made on AfCFTA National and Regional Strategies in over 40 countries...
Scroll to top