As delegates approached the inaugural AfriCaribbean Trade and Investment Forum (ACTIF) last week, the question on most people’s minds was: Where is the opportunity between the African continent and the Carribean?

By the end of the three-day forum, which attracted over 1,000 delegates, with some 700 participants from across the continent, many were convinced that there are clear synergies and opportunities and the only limit is one of imagination.

The event was convened by the government of Barbados and Afreximbank, in collaboration with the African Union Commission, the AfCFTA Secretariat, the Africa Business Council, the Caricom Secretariat and the Caribbean Export Development Agency. Caricom is an economic and political union bringing together 20 countries in the Caribbean.

Trade between the two regions is still small. Current estimates, according to Carla Natalie Barnett, secretary general of the Caricom Secretariat, put trade at a little under $1.5bn. Of $18.8bn of exports from Caricom countries to the world, Africa at $800m represents only 4.4%.

And of the $33bn of imports, only $603m derive from the African continent. Africa imports $4.5bn of fish annually but less than 1% comes from the Caribbean, so it is evident that commercial ties can be strengthened.

The International Trade Centre released a report during the Forum detailing out how trade can quickly increase by $1bn over the next five years in sectors ranging from agrifood and healthcare to tourism, fertilisers and automobiles.

There has been encouraging progress in recent years. Ties between the African continent and Caricom countries were strengthened in 2020 during the Covid-19 crisis when Caricom countries joined the vaccine acquisition programme that the African Union taskforce, the Africa CDC and the Afreximbank put in place.

Like many of the world’s smaller countries, the island nations of the Caribbean had found themselves at the back of the queue when it came to accessing vaccines. They found solidarity and support from across the Atlantic as part of the $3bn facility created to purchase vaccines at scale and in a timely fashion. Through this facility, 3m vaccines were acquired on behalf of Caricom countries.

A history of collaboration

Commercial ties may not be as strong as they should be, but policymakers were refreshingly honest in where they see the shortfalls.

In a rousing speech, Mia Mottley, prime minister of Barbados, said that the partnership has been neglected over the past 40 years largely because of a lack of political will and foresight.

While forefathers of African independence and black intellectuals of the 20th century, from Marcus Garvey to Bob Marley, proactively nurtured ties in their quest for political and economic independence, Mottley acknowledged that policymakers had too often fallen short of the lofty goals of the historical icons. Nevertherless, she argued, it is clear that more productive links are being established.

“It is not anticipated that we can reverse centuries in a few years, but it is anticipated that there are some who must claim the courage to jump off the ship and make it happen,” she said. 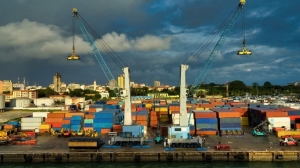 In a session focusing on the development of Special Economic Zones (SEZs), René Awambeng, global head of client relations at Afrezimbank, observed that Africa accounts for less than 2% of global manufacturing, while more than 70% of its exports are in the form of raw materials.

The Bank is investing heavily in SEZs in a bid to develop greater manufacturing capabilities, and Awambeng argued that an SEZ could be established in Dakar to export manufactured goods to Barbados, using it as a transshipment platform to access the $27tn market of North and Latin America. Air and sea bridges would have to be created to expand the potential of an SEZ.

While that remains in the realm of speculation, a number of concrete announcements were made throughout the three days.

Afreximbank announced that it would be taking more interns from the Caribbean as part of its plan to build ties. The Bank also intends to set up a Caribbean Exim Bank with an investment of $700m.

“Once arrangements are concluded and visible, we will also open an office here in the Caribbean. And if we do agree, the Bank will work with governments of the Caricom to set up a Caribbean Exim Bank as an Afreximbank subsidiary or affiliate,” said Prof. Benedict Oramah, president of Afreximbank.

That amount would be in addition to the $250m the Bank has already made available to support Africa-Caribbean trade and investment.

For their part, Caricom countries announced their intention of contributing to the Bank’s capital. A partnership agreement between Afreximbank and seven Caribbean states was signed with the objective of “ushering in investments to concretise the commercial relations between the two regions, with an immediate focus on establishing an air bridge, and business to business match-making through the newly established African-Caribbean Business Council,” the organisers said.

“We keep our promises. We didn’t travel all these thousands of kilometers to come and make a show. We came here for a purpose. Coming here is an investment towards that end. You are going to see, in the next few months, actual things on the ground,” said Oramah.