While there has always been a strong desire to boost Arab-Africa trade, the rhetoric has largely failed to match the delivery.

Arab-Africa trade has been static at 17% of the continent’s total trade for the last seven years, with China and the EU by far its two largest trading partners. Continental trade with its Arab neighbors according to Afreximbank is estimated at a mere $80bn in 2021.

But the signs are that the trade and investment winds of change are blowing over the continent from the north-eastern enclave of Arab countries centered around Egypt, the new gateway to sub-Saharan Africa (SSA).

Companies such as the ports and logistics giant, DP World, renewable energy and construction trendsetter Elsewedy Electric, and power company ACWA are already established in Africa but keen to expand operations and investments.

The WTO’s World Trade Report 2021 shows that global trade has been more resilient during the pandemic than the 2008-09 financial crisis. Similarly, Africa’s merchandise trade, says the IMF, contracted by 12.3% in 2020 and has expanded by more than 28% in 2021.

The accession of Algeria as the 52nd member of Africa’s largest multilateral trade finance institution, Afreximbank, and the National Bank of Egypt’s (NBE’s) commitment to participate in Afreximbank’s General Capital Increase are two examples of the new urgency in Arab-Africa trade and the investment direction of travel.

NBE’s total investment of $326.6m, of which $130.6m is paid-in, makes it the largest non-sovereign shareholder in the Bank. Prof. Benedict Oramah, President of the Bank, called this investment “momentous”.

Cairo’s export and investment drive into targeted SSA markets is underpinned by the government’s new plan to increase exports to Africa to $10bn by 2025.

Currently, Egyptian exports to Africa total $5bn, but of this, two-thirds go to Arab-African states and a third to SSA countries such as Kenya, Uganda and South Africa. The same is true of Egyptian investments in Africa, which topped $11.3bn in 2019.

In an interview, Oramah candidly laid out the scale of Africa’s financing needs and the potential role of Arab financial muscle in reducing this gap. “Africa’s trade finance gap remains significantly high at over $90bn,” he said, “and the participation rates of African banks in the trade finance space have been declining at a fast pace.

“The trade insurance and guarantee markets remain underdeveloped to provide the kinds of protections that traders and commercial banks would require to provide financing for cross-border trade. Africa is not adequately supplied as financial institutions are not able to meet the increasing opportunities that abound because of not having sufficient capital.”

Afreximbank and the ICIEC (the export credit agency of the Islamic Development Bank) are two of the prime movers behind the Arab-Africa Trade Bridges (AATB) Programme, perhaps the single most important conduit for boosting Arab-Africa trade and investment.

Afreximbank signed an MoU with ICIEC at a meeting in Sharm El Sheikh in Egypt in March, to cooperate on the provision of export credit and investment insurance, including confirmation of LCs and guarantees in favour of member countries common to both entities. 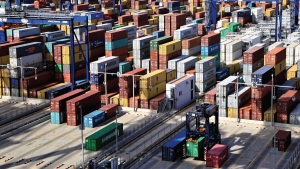 The game changer could be the landmark multi-billion-dollar Arab-Africa Guarantee Fund (AAGF) approved by the AATB Board in March, which is due to start operations in 2023.

The Fund provides “a scalable structure that aims to mobilise financial resources and risk mitigation capacity to support trade and investment in Arab and African countries; and ensures that all-in pricing of transactions is optimised for the end beneficiaries through blended structures.”

“The AAGF,” agrees Oramah, “is a good tool as it will serve the purpose of reducing premiums as well as the overall pricing charged by guarantee/insurance entities as well as provide first and second-loss coverage on transactions, thereby supporting investment flows to critical sectors, which will lead to economic growth and development in Africa.”

Similarly, Oussama Kaissi, CEO of ICIEC, believes that “credit and political risk insurance can boost the volume of trade finance to meet the objectives of both AATB and infrastructure investments.

“The needs of the Arab and the African countries are far more than the capabilities of AATB partners. It becomes imperative to seek innovative structures that can leverage the capabilities of existing member institutions and offer appropriate risk mitigation tools to mobilise financial resources from external partners.” ICIEC alone has closed $5.6bn worth of transactions to date under the programme.

By the far the most proactive conduit for supporting African trade finance is ITFC, the trade fund of the IsDB Group. In June, ITFC signed agreements totalling $12bn, almost entirely with African states and entities. The largest was a $6bn agreement with the Egyptian government to finance various initiatives in support of the country’s food and energy needs.

Under the agreement, the corporation will strengthen the Bank’s ability to help its customers in participating member countries to purchase goods, particularly commodities that are experiencing a surge in food price inflation in the global market.

ITFC in addition extended several other Murabaha facilities, including a $116m financing to Senegal for the purchase of refined petroleum products; a 1-Year $240.2m financing to Burkina Faso to fund the import and export of strategic energy products, food commodities and cotton; and a $50m facility to Mauritania for the purchase of commodities and products, with Somelectrc the executing agency.

Another pointer is the $176.2m of development finance approved by IsDB at its annual meetings in Sharm El Sheikh, Egypt in June. The funds were approved to finance new transport, health, water and sanitation, and food security projects in four SSA countries – Guinea Bissau, Togo, Benin and Cameroon; the largest initiative being $84.62m of financing for the Rice Value Chain Development Project in Cameroon.

The promise of the AfCFTA, with its market of 1.3bn people and combined GDP of over $3trn, is propelling the urgency over boosting Arab-Africa trade and investment, as Arab states and institutions are eyeing the AfCFTA’s attributes with relish.

However, a trade survey of African CEOs in June by the pan-African private sector trade and investment committee (PAFTRAC) revealed that “implementing the AfCFTA will be a long process that will be achieved by thousands of small steps.

Making the required legislative and regulatory changes depends on the political will of all the governments involved. Mistrust could easily restrict implementation, particularly where businesses on one side of the border fear increased competition from perhaps more economically developed markets.”