Is Africa still stretching on the sidelines, or is the continent finally out of the starting blocks in the race to shape the global economy? Many hope the African Continental Free Trade Agreement (AfCFTA) has fired the starter’s gun, but sceptics say this ambitious trade pact may mark more false hope, perpetuating a decades-old replay of Groundhog Day. Is that true, or are the signs more promising than that?

Referencing the late Harvard professor Calestous Juma at a recent Dunning Africa Centre (DAC) webinar at Henley Business School, Francis Mangeni, senior fellow at the Nelson Mandela School of Public Governance and an acknowledged expert on AfCFTA, said: “When it comes to trade, Africa should be one country.”

If this is to be the case, the AfCFTA will have to be a game-changer for the continent. To date, political buy-in has been high, with the agreement having been ratified by 42 countries, and there is a solid economic case for what so far has been a legally sound project.

The AfCFTA has not been built from scratch, Mangeni notes. This far-reaching agreement was built on already established regional centres, from the East African Community (EAC) to the Southern African Development Community (Sadc), Common Market for Eastern &amp; Southern Africa (Comesa), and Economic Community of West African States (Ecowas), with the AU being the golden thread tying it all together.

This supports the case that the future of free trade on the continent is built on solid foundations, increasing the odds for success and meaningful implementation. 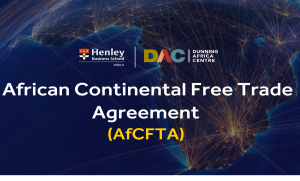 So far, so good. But sceptics will argue that Africa has tried for many years to integrate itself to become a pan-African continent, so what is different now? Some of the common themes around why AfCFTA is doomed to a false start include the often repeated mantra that intra-Africa trade is limited to just 15% of Africa’s total trade. Weak infrastructure criss-crosses the continent, and there is a severe infrastructure deficit among nations.

Varying levels of development, and diverse cultures and languages, mean trade-aligned integration is challenging, and the synchronisation of regulations is inharmonious at best. Furthermore, prohibitive bureaucracy continues to pothole border crossings with time-consuming delays and paperwork.

One of the biggest hurdles for Africa is the restricted access to finance. According to Andrew Mold of the UN Economic Commission for Africa, who was also an invited panellist at the DAC webinar, banks are a major block here. Interest rates are high, meaning borrowing is costly and exclusive to a higher-income base. This is out of touch with the majority of Africans and starves entrepreneurial green shoots from the sunshine needed to grow.

Clearing the path to success

Mold points out that, fortunately, many of the sceptics’ concerns can be debunked — or turned into opportunities. For example, he says the fixed idea that trade in Africa is limited is largely misleading. Intra-African trade has far greater economic significance than is commonly believed because the picture is distorted by large-scale commodity exports to destinations outside the continent, and there is a systemic failure to recognise the scale of informal cross-border trade.

Similarly, the notion that Africa is behind the curve in digitisation is misguided. Consider Mpesa as an example of a business fast off the mark in mobile money. As a pioneer in its field, it is now one of the biggest mobile money movers in the world. Fintech is a burgeoning space, with innovation and initiatives such as the Pan-African Payment &amp; Settlement System set to smooth the path to borderless transactions. If sceptics point to internet access as a limiting factor, then businesses need to see this as an opportunity to build and invest in.

The strengthening of regional value chains will be a key enabler for AfCFTA. It is a tired narrative that we should pit small and medium enterprises against big business when comparing the main drivers of value. It shouldn’t be a dichotomy – all should, and will need to, participate in these value chains. Pumping regional arteries will fuel African economies to propel the continent forward with speed and momentum.

Perhaps the most fertile sector to underpin regional growth and facilitate trade is agriculture, where strong value chains can be created. Beyond being important for food security, growing and trading produce could be a core focus for intra-African trade. As a positive example, Morocco is investing in fertiliser companies in Ethiopia and Rwanda. Foreign direct investment need not only come from international partners; Africa’s biggest players should look inwards to both invest and harvest fruitful returns.

With most of the big African economies solidly behind the AfCFTA and regional negotiations on tariffs, intellectual property rights, investment and competition policy continuing apace, we can expect to see some progress within the next few years. Larger economies will likely be the front-runners in the same way France and Germany were within the EU. Like in the EU, this leadership from the larger economies gives the smaller countries an added incentive to join, since they are likely to benefit most from the agreement.

The principle of “multiple speeds” is built into AfCFTA, and will help ensure no country is left behind and that those that are ready now can move forward. But we may have to be patient to see the real benefits emerge. It took decades for the EU to form and mature. It has taken three years for African countries to ratify and now begin to execute the AfCFTA, against the backdrop of significant disruption from the Covid-19 pandemic.

There is a lot to play for. The AfCFTA will be the largest free trade area in the world, both by area and the number of countries — and its impact could be equally large. The World Bank estimates it has the potential to lift 30-million people out of extreme poverty.

However, achieving its full potential will largely depend on the extent to which it is popularised for all stakeholders and its benefits and opportunities shared. As African economist Carlos Lopes commented in an interview with Le Monde earlier in 2022, it is time for Africa to be more united to defend its own interests. “This is an African project that will require African commitment to succeed.”