On Tuesday, July 12, 2022, officials from the Ministry of Trade, diplomats and multi-faceted entrepreneurs converged on the Kempinski Hotel for the launch of the Africa World Trade Network (AWTN).

The launch was held under the theme “Showcasing Africa’s Industrialisation Capacities”.

In attendance were the Secretary-General of AfCFTA, H.E Wamkele Mene, the Deputy Minister for Trade, Michael Okyere Baafi, H.E Asia Kirabo Kacyira, High Commissioner of Rwanda to Ghana and other diplomats from Africa, Europe and Asia.

In the wake of the Africa Continental Free Trade Agreement (AfCFTA), AWTN seeks to lead the way in pursuing tailored trade solutions in the best interest of Africans. 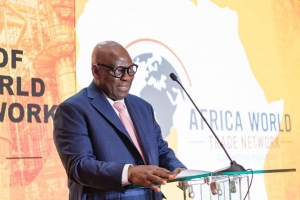 The Secretary-General of AfCFTA, H.E Wamkele Mene, in his speech lauded the initiative and made an audacious call to African leaders to dissolve barriers to free movement of Africans across the continent.

”It is inconceivable that in 2022, as Africans, we require visas to enter other African countries,” he said.

”The signing of AfCFTA should be accompanied with free movement of persons across the African continent. This will boost trade and immensely benefit the continent,” he added.

The Deputy Minister for Trade, Michael Okyere Baafi,  who spoke on behalf of Alan Kyerematen, Minister of Trade and guest speaker for the launch, pledged the Ministry’s unwavering support to AWTN “for our collective good”.

AWTN is a pan-African events and networking platform that specializes in multi-sectoral trade-related programmers.

The platform provide the perfect framework to scaffold private sector actors, government and development partners onto initiatives to spur Africa’s economic gains with the aim of making the continent globally competitive.