The private sector in the East African region wants finalisation of Rules of Origin under the African Continental Free Trade Area (AfCFTA) speeded up. The call was made early this week in Nairobi by the business leaders during a consultative meeting organised on AfCFTA and Tripartite Free Trade Area (TFTA).

It emerged at the forum co-organised by the East African Business Council (EABC) and Trade Mark East Africa (TMEA) that 43 out of 55 African countries have ratified the AfCFTA agreement.

Forty five countries have already submitted the schedule of liberalisation plus 87 percent of Rules of Origin for products that have been agreed upon. However, according to Mr Prudence Sebahizi, the chief technical advisor on the AfCFTA at the African Union (AU) Commission, the process is yet to be finalised.

He said products such as textiles and clothing products alone compose 10.5 percent of the outstanding Rules of Origin yet to be finalised under the AfCFTA trade arrangement.

Motor vehicle parts and accessories compose 1.4 percent of the outstanding Rules of Origin while tobacco and tobacco substitutes and fish and others compose one percent. Speaking at the meeting, EABC executive director John Bosco Kalisa said finalisation of Rules of Origin negotiation at AfCFTA was crucial for the new trade regime.

“It is crucial because the outstanding products are central in the East African Community (EAC) regional value chains and job creation,” he said. Mr Kalisa called for compliance to the agreed-upon protocols and implementation of customs processes such as tariff reductions for trade to materialise under the AfCFTA. 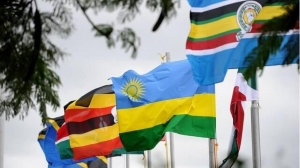 He said the AfCFTA should be anchored on strong private sector engagement, calling for trust building and mindset shift to promote ‘Made in East Africa’ and ‘Made in Africa’ products. Mr Sebahizi said intra-Africa trade stood at 18 percent while under the AfCFTA arrangement trade within the continent would be boosted to 70 percent. Due to the recent devastation by Covid-19 and war in Ukraine, the industry leaders are calling for import substitution to boost intra-Africa trade.

On the other hand, the EAC regional value chains should feed seamlessly into the continentalvalue chains, delegates at the meeting observed. Ms Anatanria Uwamariya, TMEA director of Business Competitiveness, said strengthening early monitoring and detection mechanisms and resilience of the EA economies was “important in light of the global disruptions.” She urged the EAC partner states to tap into competitive and comparative advantages in order to boost cross border trade in the region.

“Access to market intelligence data is important for businesses to trade under AfCFTA”, she stated, noting that TMEA would promote public-private partnerships to improve infrastructure connectivity in Africa. Besides, finalisation of the negotiations on the Rules of Origin at the AfCFTA level, the business leaders called from strong trade dispute resolution mechanisms to be put in place.

Other requests included open skies for the EAC bloc, capacity building at AfCFTA, publication of AfCFTA e-tariff books and host of the next edition of intra-Africa Trade Fair in East Africa. The meeting was attended by over 50 business and industry leaders and policy experts from the private sector associations from Tanzania, Burundi, Kenya, Rwanda, South Sudan and Uganda.

Published By :- The Citizen

AfCFTA Protocol on Women and Youth in Trade in the Offing – Wamkele M...
Scroll to top