Photo by Christina @ wocintechchat.com on Unsplash

African youth have been called upon to own and take lead role in the implementation of the African Continental Free Trade Area (AfCFTA) and Agenda 2063.

The call was made at the inaugural webinar dubbed Africa Expects Youth Series, an initiative that seeks to give an opportunity to African youths to discuss several issues affecting the continent with a solution-oriented perspective.

Spearheaded by the Pan-Africa Movement (PAM) Rwanda Chapter, the webinar brought together pan-African youth from Rwanda, Morocco, Ghana, Nigeria and South Africa to discuss ‘youth as stakeholders in the implementation of Agenda 2063 and AfCFTA’. 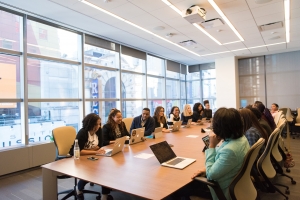 Agenda 2063 was initiated by African leaders, with the intention of refocusing and reprioritise Africa’s agenda from the struggle against apartheid and the attainment of political independence for the continent to achieving inclusive social and economic development.

The Agenda also seeks to achieve continental and regional integration, democratic governance and peace and security amongst other issues aimed at repositioning Africa to becoming a dominant player in the global arena.

On the other hand, AFCFTA aims at reaching integration of the African countries in bid to ensure collective benefits. The agreement’s implementation is slated for January 1, 2021, after being postponed due to the Covid-19 pandemic.

According to Louis-Antoine Muhire, the Made in Rwanda Project Manager at the Ministry of Trade and Industry, youth’s role in the implementation of continental policies should start at the grass-root level.

“Championing change does not begin from getting top sits in the government, it begins at the community level by making contributions wherever necessary,” he said.

“Experience is something that young people have to value, not simply having academic degrees. Take risks and consistently try new things. Let your actions give you the opportunity to serve,” he added.

Raymond Okpani a Nigerian pan-Africanist also reiterated that the role of youth in the implementation of AfCFTA and Agenda 2063 include striving for unity among Africans.

He noted that “Africa is blessed to have a high percentage of young people, and the destiny of Africa is in their hands. For us to achieve all set targets, we should focus on the things that unite us rather than our differences, and deliberately put our abilities to work, because the targets won’t be achieved by the will only.”

Meanwhile, Karima Rhanem the North Africa coordinator for the Innovation for Change Hub Africa reiterated that youth should make all necessary steps and go to the communities to ensure that they benefit from set policies, a step she said would make youths be part of solutions that Africa needs.

Almost 60 percent of Africa’s population in 2019 was under the age of 25, making Africa the world’s youngest continent. According to the UN’s demographic projections, the median age in Africa is going to be 19.8 in 2020, which stresses the need for their role in Africa’s development. (The New Times)

Photo by Kelly Fournier on Unsplash What opportunities does the AfCTA hold for women?
Scroll to top