The implementation of the African Continental Free Trade Area (AfCFTA) will significantly boost intra-African trade within the next 10 years.

The Secretary-General of the AfCFTA, Wamkele Mene, who disclosed this in an interaction with the media on Friday prior to a meeting of African Union (AU) Ambassadors and High Commissioners in Ghana, said AfCFTA is expected to increase intra-African trade from the current 18 percent to 40 percent.

He said the AfCFTA would address the barriers to trade and goods from AU member states would be zero-rated.

The meeting was to discuss key issues concerning the roll-out of the AfCFTA on January 1, next year and its impact on development amid the COVID-19 pandemic.

The AfCFTA is a single market with free movement of goods, services and people created to boost intra-African trade and leverage the continent’s combined Gross Domestic Product of US$3.4 trillion and population of 1.3 billion.

Following three-and-a-half years of negotiation, the agreement establishing the trade area was signed in Kigali on March 21, 2018, and entered into force on May 30, 2019.

The AfCFTA has been ratified by 28 countries out of 54 which have signed it, and Nigeria, according to Mr Mene, has expressed the intention to ratify it. 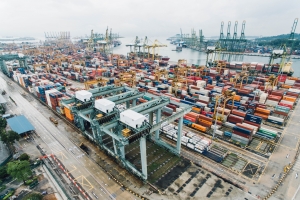 According to Mr Mene, Africa, although was young, had an average age of 19.7 years with 60 per cent of the world’s arable land, measuring 30 million square kilometers in total land area.

“This means that as a bloc, Africa is a large market that supports critical and transformational levels of investment and carries weight in international relations and engagements with other powers on the globe,” the AfCFTA Secretary-General said.

Mr Mene said the AfCFTA had a wide range of instruments to promote a robust and comprehensive trade regime to facilitate trade and provide benefits for small to medium-scale enterprises.

“The AfCFTA is a timely and critical intervention in addressing the COVID-19 pandemic, and achieving the socio-economic transformation of Africa under the Agenda 2063 through trade and industrialization,” he said.

Mr Mene said the AfCFTA could assist in fighting the pandemic by promoting production and faster movement of personal protective equipment and medicines.

He said despite the pandemic, which was expected to result in a loss of 25 to 30 million jobs in Africa, the AfCFTA had good prospects as a growth pole for reviving the African economy, which, over the last three decades, had grown above world averages and had had some of the fastest-growing economies in the world.

Mr Mene underscored the need for outstanding negotiations on rules of origin and market access to be completed and the instruments widely publicized to help stakeholders to plan.

The Secretary-General tasked government implementing agencies to have in place all the required trade and customs documents and the institutional readiness to facilitate trade under the AfCFTA. (GhanaWeb)

AfCFTA’s promise of free trade is prosperity for all Africans – ECOWAS ...
Scroll to top