The AfCFTA treaty recognizes the role of the Regional Economic Communities (“RECs”) to the success of the free trade project by codifying as one of its guiding principles the notion that the RECs’ Free Trade Areas (“FTAs”) shall be “the building blocs for the AfCFTA.”

The expectation is that the RECs will provide the head start and the initial experiment of what to expect in the larger continental free trade area. However, in view of the varied features and objectives of the existing RECs amongst other limiting factors, navigating the complex relationship between the RECs on one hand and the AfCFTA on the other, as well as the issue of overlapping membership will provide an acid test which if not properly handled will act as a stumbling block to the AfCFTA.

These 8 RECs with a combined GDP of over $2.6 Trillion are the only regional economic blocs codified in article 1 of the African Continental Free Trade Area (AfCFTA) treaty.

The role of RECs in the AfCFTA Negotiations and Ratification The RECs have continued to play a very essential role right from the formation of the AfCFTA. For instance, the ECOWAS apart from hosting the AfCFTA Secretariat, provided both technical and institutional resources at the negotiation stage of the agreement. The ECOWAS common external tariff (CET) was the basis for ECOWAS member States tariff negotiations under the AfCFTA. 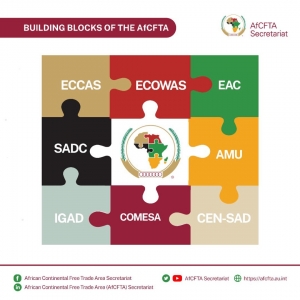 IGAD has also moved away from its original focus on drought and environmental issue to trade and regional cooperation and this came to light during the AfCFTA negotiation. At the SADC Council Meeting held last year, the regional body urged the member States that have not yet signed and ratified the AfCFTA to do so to allow for the implementation of the Free Trade Agreement. At the said meeting, member states were also encouraged to ratify the tripartite Free Trade Agreement involving COMESA, EAC and SADC. Similar calls have also been issued by other RECs aimed at galvanizing their members not only to ratify the AfCFTA treaty but to take further steps to domesticate it.

Experts have argued that a successful implementation of the AfCFTA depends largely on smooth interface with the pre-existing RECs. Speaking at the 7th COMESA Annual Research Forum, the Director, Capacity Building Development at the United Nations Economic Commission for Africa (UNECA), Dr. Stephen Karingi reiterated the above point and further observed that the AfCFTA has provided some level of flexibility on the co-existence of a web of connected, yet distinct trade regimes, which would be consolidated at some later stage.

Navigating the complex relation between the RECs and the AfCFTA

Indeed, the AfCFTA treaty envisages the complexity of the relationship between the Continental and regional blocs by providing in articles 5 and 19 how the two regimes can work together to drive the vision of a liberalized African market. Whilst article 5(b) of the treaty recognizes the RECs’ FTAs as “building blocs for the AfCFTA”, article 19(1) provides that “in the event of any conflict and inconsistency between this Agreement and any regional agreement, this Agreement shall prevail to the extent of the specific inconsistency, except as otherwise provided in this Agreement.”

Notwithstanding the above provisions, the AfCFTA treaty still permits State Parties that are members of other regional economic communities, regional trading arrangements and custom unions, which have attained amongst themselves higher levels of regional integrations than under the AfCFTA to maintain such higher levels among themselves. It is submitted that the treaty provision is not adequate as it only highlights the over-arching framework leaving the RECs to work out the details of their actual roles.

Harmonizing state parties’ overlapping regional allegiance with their AfCFTA treaty obligations will require a high level of dexterity and collaboration. One noticeable flaw is that the AfCFTA treaty makers assumed that all the RECs have already attained the FTAs status which is not the case. Currently, only four RECs (COMESA, ECOWAS, EAC and SADC) out of the eight are Free Trade Areas. AMU, CEN-SAD and ECCAS and IGAD have not attained the FTAs status yet and there is even no indication of any steps in that regard.

In point of fact, AMU and CEN-SAD have been somewhat dormant in recent years. Another issue is that some of the AU members who make up the RECs are yet to ratify the AfCFTA treaty. For the AfCFTA minimalists, regional integration is more appealing than the continental project. Similarly, the level of development, economic diversification and industrialization vary markedly across the RECs and this will equally reflect on each REC’s capacity to take advantage of the AfCFTA.

The above-mentioned factors notwithstanding, the interest generated by the AfCFTA and the promises of a larger continental market is enticing enough to stimulate the RECs to work together in building an architectural framework that will see to the actualization of the AfCFTA objectives.

What the RECs should be doing

As we have often seen in the case of the ECOWAS, regional political stability, human right and insecurity dominate the agenda of the regional economic blocs far and above any economic and intra-trade advancement. The recurrent political instability and insecurities in some of the RECs have shifted attention from the actual business of economic integration to peacekeeping operations.

Just last week, it was reported that the East African Community (EAC) has formed its regional force with the first assignment being the peacekeeping operation in the newly-admitted Democratic Republic of Congo which has been engulfed in violence. Many have also blamed the former colonial powers for continuous interference with the internal affairs of the RECs, particularly in the Francophone countries.
African countries need to look inward and develop a strategy to solve the recurrent insecurity on the continent and promote intra-African trade and industrialization using the RECs as the springboards.
Indeed, the RECs should in true sense provide the building “blocs” for the AfCFTA rather than being the
stumbling blocks.

2022 Africa CEO Trade Survey – What does the AfCFTA mean for African busi...
Scroll to top