The removal of tariff and non-tariff barriers is as essential for the growth of African trade as creating better infrastructure and connectivity, says the AfCFTA&#39;s Secretary-General.

The African Continental Free Trade Area (AfCFTA) is the world’s newest and most ambitious trade bloc. It is also, after the World Trade Organisation, its biggest, covering 1.2bn consumers in 55 countries that together generate annual GDP in excess of $3 trillion.

While the commencement of free trading under the agreement on 1 January 2021 was partially overshadowed by Covid-19, the elimination of barriers such as tariffs, quotas and duplicative regulations and the achievement of frictionless trade is expected to be an engine of growth on the continent for decades to come.

Wamkele Mene – the South African lawyer, civil servant and trade negotiator who two years ago was elected the first secretary-general of the AfCFTA – remains determined that the bloc will have a transformative long-term impact across the continent. 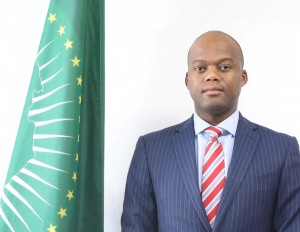 The AfCFTA is a long-term project Speaking with African Business during a recent visit to London, Mene says there has been a remarkable level of progress and political agreement since negotiations first commenced in 2015, with 42 countries so far ratifying the AfCFTA. He says that the AfCFTA is a long-term project that will yield multiple benefits.

“What we are doing is not something that can be done in five to ten years. This is going to take decades but we will see the results, I believe. We will see the results in 20 to 30 years’ time in terms of competitiveness by investing in infrastructure, investing in productive capacity and then reducing and eliminating the legal barriers to trade.”

But it is precisely the project’s importance to development – and the potential to hamstring countries’ own progress if things go wrong – that Mene says accounts for any remaining difficulties in getting the finer points of the agreement over the line. Rules of origin – the criteria applied to products to determine which country or countries they originate from – have long been a sticking point in negotiations.

While agreements now cover 88% of all products being traded, Mene is frank; the remaining uncovered products – mainly in the textiles, automotive, sugar and fisheries sectors – are “really important… for any country’s economic export strategy.”

“We have to be very cautious… [because] these issues go to the heart of a country’s industrial development… Once you make the commitment, it’s a long-term commitment with far-reaching consequences. It’s perfectly reasonable that countries should take time to get a better sense of the implications of agreeing to this type of rule of origin, vis-à-vis that type of rule of origin, because that has an impact on economic activity.”

Towards a customs union

This pragmatism infuses Mene’s perspective on members negotiating their own trade agreements with third countries outside the AfCFTA process. Kenya, for example, signed a new bilateral agreement with the UK just weeks before trading under AfCFTA rules commenced.

For those who wish to see Africa speaking with one voice in trade negotiations, this undercuts the spirit of the project, but Mene points out that the AfCFTA is not yet at such a stage.

“The AfCFTA is a free trade area. It’s not a customs union yet. That’s the next step that we will take. For the moment, until we get to that point, countries still have the right to negotiate trade agreements individually. The agreement establishing the AfCFTA does make provision for that, it does allow for countries to negotiate with third countries under subject conditions.”
In any case, he adds, the AfCFTA rules require signatories to provide the same terms or better to the entire membership when negotiating new trade agreements with non-African countries.
“We, of course, will make an assessment and each member state will make an assessment of the benefits that are extended to a third country vis-à-vis what they are getting.  If the benefits that are being extended to that third country are better, then subject to negotiations, they have to be extended to the entire AfCFTA…
“What the heads of states were very clear about is that where this happens, where countries negotiate with a third party, they must do so bearing in mind that the priority is to consolidate the AfCFTA. That’s the most immediate priority and that any other third country agreement should not undermine the implementation of the AfCFTA.”

The achievement of greater intra-African trade is not the only thing driving the AfCFTA. As Cambridge economist Ha-Joon Chang argued in his 2002 book Kicking Away the Ladder, African countries have long suffered within an international trade regime dominated by powerful, developed countries that have benefited from unfair trade and industrial practices. Mene reserves some of his sternest language for subsidies provided to European farmers under
the EU’s Common Agricultural Policy, saying that they have had a “grossly distorting” effect on trade.

“If you are a cotton farmer in Mali, in Burkina Faso [for example] you are not in a position to compete globally because of subsidies. This is a question that I think should remain on the agenda of WTO negotiations.”

The AfCFTA, he says, has moved quicker and further than its competitors on such practices, and plans to bring this example to the WTO to pressure them to follow suit. “The AfCFTA has moved much further than other fora around the world… to put forward reforms that we have advocated for since the Doha round began in the year 2000. On the strength of their reforms that we have introduced in the context of the AfCFTA we have to take these reforms to
the WTO and demonstrate that actually it can be done.”  On intellectual property, another sticking point between Africa and wealthier nations,  Mene wants “frank discussions”.

The Covid-19 pandemic has thrown into sharp relief inequities within the global intellectual property regime, with African countries largely barred by the WTO from domestically producing Covid-19 vaccines that were developed and patented in Europe and North America, even in the face of failures by developed countries to fulfil their promises of equitable vaccine distribution. This has translated into highly uneven capacities to manage and bounce back from the pandemic. Compared to Europe, which has already boosted 75% of its population, the World Health
Organisation reports that just 14% of Africans are fully vaccinated. For Mene, the implication is stark.

“Let us have the transfer of technology that is required to enable governments to take steps to save lives.  When confronted with a public health crisis of this nature, we may want to say temporarily, “let’s place a hold on enforcement of rights under IPR and let’s focus on saving lives.”

Mene particularly urges support for a joint South Africa-India proposal to temporarily waive patents for Covid-19 vaccines. While detractors – among them Nobel Prize-winning economist Joseph Stiglitz – call for rejection of the proposal given it does not extend to tests and treatments and retains many onerous conditions, Mene calls it a “step in the right direction”.

“India and South Africa’s proposal which has been supported by over 100 countries now – that proposal is very pragmatic. It is narrow in scope, it is targeted during periods of public health crisis.  It’s not a wholesale rejection of the TRIPS agreement [the Agreement on Trade-Related Aspects of Intellectual Property Rights, an international legal agreement between all the member nations of the World Trade Organisation] and the rights that are in it.  It is a pragmatic approach that South Africa and India have had to take and I think that’s why a lot of countries have
supported it.” Mene says that intellectual property will continue to be a focus of talks. “We have an opportunity [for] an intellectual property rights regime that… reflects the need for protecting public health.”

Meanwhile, Mene will look to oversee progress on multiple fronts, a challenge given the huge expectations.

Some commentators have suggested that the barriers to intra-African trade are not so much policies, but the lack of infrastructure, transport, communications and connectivity. Mene only partially agrees with such an outlook, stressing the equal importance of all these factors.

He emphasises the need for a complementary approach to solving the problem of low intra- African trade, highlighting that, if the goal is really to use trade as a vector of productivity, competitiveness and long-term development on the African continent, “you have to solve all of it together”.

UK government to support AfCFTA with £35 million
Scroll to top