The Food and Agriculture Organization of the United Nations (FAO) warns about a looming food crisis in Sudan driven by the combined impacts of armed conflict, low production of key staple crops and economic turmoil.

A multi-partner Integrated Food Security Phase Classification (IPC) analysis, issued today and conducted between March and April 2022, involving 19 agencies, including several government departments, specialised UN agencies, and local and international non-government organisations, indicates a significant deepening in Sudan’s food crisis. A record 11.7 million people, almost a quarter of the country’s population, are projected to be facing acute hunger at the height of the lean season in September— an increase by nearly 2 million people compared with the same period last year.

Western, Northern, and Central Darfur, Khartoum, Kassala and the White Nile States — hardest hit by conflict and economic decline— host the highest caseload of Crisis (IPC Phase 3) and Emergency (IPC Phase 4) levels of food insecurity during the projection period from June to September 2022.

“These troubling numbers are the clearest indication of the deteriorating food security conditions in the country,’’ said Babagana Ahmadu, FAO Representative to Sudan. “To prevent more people from slipping into crisis and emergency conditions and stave off a looming food crisis, it is imperative that we double down on investments in local food production to ensure farming and herding families can feed themselves and their community in the coming months.”

The first half of 2022 marked the height of the country’s political crises, economic meltdown and external factors such as the war in Ukraine. The analysis indicates conflict as one of the key drivers of food insecurity, along with economic decline, hikes in food prices, and poor harvests due to unfavourable weather conditions.  In fact, the harvest for the 2021/22 season is expected to drop by over a third compared to previous seasons. 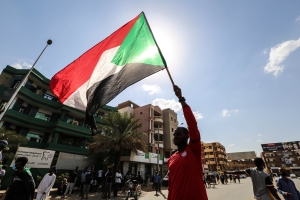 The war in Ukraine is further exacerbating food situation in Sudan, which is dependent on wheat imports from the Black Sea region. An interruption in the flow of grain into Sudan will raise prices and make wheat imports more difficult. Prices of wheat from the Black Sea region are currently over $550 per tonne, representing a 180 percent rise compared with the same period in 2021.

FAO continues to scale up its assistance to farmers and herders in rural areas and, through the end of the year, will assist more than 2 million people with a range of interventions supporting crop, livestock and vegetable production, cash transfers and the rehabilitation of vital irrigation infrastructure and systems.

FAO is urgently calling for at-scale action, including increased funding, to address the sharp rise in food insecurity and to save lives, livelihoods and prevent a worse hunger crisis in the country.

The Integrated Food Security Phase Classification (IPC) is a set of tools and procedures to classify the severity and causes of acute food and nutrition insecurity as well as chronic food insecurity based on international standards. The IPC analysis in Sudan is led by the Food Security Technical Secretariat of the Ministry of Agriculture and Forests of Sudan with the technical working groups composed of all government line ministries, United Nations agencies, and non-government partners and members of the IPC technical working groups at federal and state levels facilitated by the IPC Regional and Global Support Units.