The Secretary-General of the Africa Continental Free Trade Area (AfCFTA) Secretariat, Mr
Wamkele Mene, has urged regulatory bodies in Africa to leverage the AfCFTA to promote the pharmaceutical industry. He said the pharmaceutical industry could build the continent’s research and development capacity, harmonies regulations in drug registration, and help countries comply with best practices and international standards.
“This will, among others, strengthen the fight against substandard and counterfeit medicines and medical products, while fostering the building of an enabling environment for continental production of medicines and vaccines,” he said. 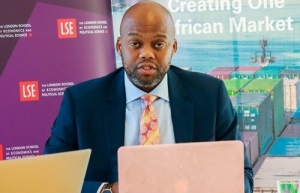 Mr Mene was delivering the closing keynote speech at the 8th annual London School of Economics (LSE) Africa Summit held in London on Sunday on the theme: “African Prosperity through Peace, Health and Development”. First established by LSE students and held in 2014, the two-day conference creates the platform for centring afro centric scholarship and exploring issues critically, in response to a rapidly evolving continent. This year’s edition brought together leading African policymakers, scholars, politicians, activists, and business people to engage in topical conversations about prosperity on the continent.

Mr Mene said improving the health of a nation’s citizens could directly result in economic growth because there more people would be able to conduct effective activities in the workforce. He said health presented a challenge for all nations because, in a study by the Pew Research Center, a median of 85 per cent of respondents believe it was a problem in their country.“Effective public health systems are essential for providing care for the sick, and for instituting measures that promote wellness and prevent disease,” he said.

Mr Mene said the operationalisation of the AfCFTA had put Africa in a stronger position to address challenges in the healthcare space, especially in the pharmaceutical industry. That, he said, would be done by creating a platform to harmonies national standards, pool procurement of medicines and pharmaceutical products as well as increase investment in pharmaceutical production and exports.“Indeed, the regulation would be critical to guaranteeing the protection of the 1.3 billion African market from fake, substandard, and counterfeit products and services,” Menesaid.

Mr Mene said AfCFTA was also an important instrument for helping African countries engage in pooled procurement of essential medicines and medical devices, as seen during the early days of the COVID-19 pandemic.
He said the pandemic had intensified the need for African countries to enhance their capacity to produce pharmaceutical products and vaccines as well as pharma investments and technology support.
“Such investments will depend on enabling factors such as intellectual property rights protection (IPRs), regulatory approval of new drugs, financing, among others which are enabled by the AfCFTA,” he said. The AfCFTA phase II protocol on IPRs, Mr Mene said, would create a strong enabling environment for IP creation, protection, administration and enforcement which will stimulate innovation and competitiveness in the business sector.