After being twice postponed due to the pandemic, the Commonwealth Heads of Government Meeting (CHOGM) will take place in Rwanda’s capital city, Kigali, from 20-26 June. CHOGM is usually held every two years and brings together the 54 countries that make up the Commonwealth – a club of mostly former British territories and colonies, among them 19 African countries.

Monarchs, presidents and prime ministers from Africa, the Caribbean and Americas, Europe, Asia and the Pacific will travel to Rwanda to discuss this year’s theme: “Delivering a Common Future: Connecting, Innovating, Transforming”. Preceded by a number of forums, the official opening of CHOGM 2022 takes place on Friday 24 June and is followed by the main high-level meetings of Heads of Government on Friday 24 to Saturday 25 June.

This year’s event will see the election of the secretary-general. Incumbent Patricia Scotland, a Dominica-born British diplomat, barrister and politician, is standing for re-election, but will be challenged by Jamaican foreign minister Kamina Johnson Smith, who has been endorsed by the UK. Media reports suggest that the UK is no longer confident that Baroness Scotland can modernize the organization.  At the end of CHOGM 2022, Rwandan President Paul Kagame will take over from UK Prime Minister Boris Johnson as the chair-in-office of the Commonwealth of Nations for the next two years. 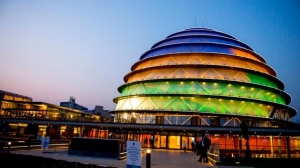 In recent years, the Commonwealth has gathered increasing attention from African countries with a limited historical relationship with the UK, especially since both Mozambique and Rwanda joined the organization, in 1995 and 2009 respectively. The Togolese government announced in April that it will officially apply to join the Commonwealth at CHOGM 2022. Francophone Togo is also a member of La Francophonie, an organization that brings together a large number of French-speaking nations and counts 28 African countries.

For African countries, joining the Commonwealth is more about developing soft power and extending their voice across the globe than increasing their trade relationships with the English-speaking world, according to a leading academic expert.

The Commonwealth claims that it is 19% cheaper for member states to export to another member than to an outside country, although this is hard to independently verify. “Countries might also have better access to the UK’s aid budget, but the commercial benefits from joining are marginal,” says Murphy.

The relevance of the Commonwealth in Africa today is diminished by the growing importance of regional blocs within Africa. “Ecowas, for instance, was important in forcing out the president of Gambia, Yahya Jammeh, when he refused to step down after his loss. But the Commonwealth did not do anything because they did not have the means or legitimacy,” argues Murphy.