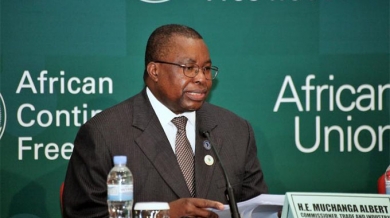 A senior official of the African Union (AU) has noted that leveraging the African continental free trade area (AfCFTA) contributes to silencing the guns in Africa, through the process of delivering broad-based prosperity on the continent.

The 33rd AU summit is being held under the theme, Silencing the Guns: Creating Conducive Conditions for Africa’s Development, at the AU headquarters in Ethiopia’s capital Addis Ababa.

Speaking to the press last Thursday in the framework of the summit, the AU Commissioner for Trade and Industry, Albert Muchanga, said the AfCFTA, as a development programme, broadens policy space for development and compliments the programme of silencing the guns.

“The advocates of free trade have long argued that its benefits are not merely economic. The advocates advise us that free trade also encourages people and nations to live in peace with one another. They also point out that free trade reduces the possibilities of war by making nations more economically interdependent because free trade makes it more profitable for people of one nation to produce goods and services for people of another nation,” he said.

Stating that silencing the guns in Africa is aimed at creating a conducive environment for development, the Commissioner underlined the need to implement the AfCFTA agreement effectively in order to successfully silence the guns.

“With the AfCFTA working and producing tangible benefits, Africa will be able to create conditions for ending poverty and unemployment. Poverty and unemployment are some of the key factors that generate social and political tensions, which if left to linger, can transform into tension and conflicts,” noted the Commissioner.

Fifty-four of the 55 AU member states have signed the agreement establishing the AfCFTA, and 28 countries have ratified and deposited the instruments of ratifications with the AU.

Speaking of the progress on the ratifications of AfCFTA agreement, the AU Commissioner said that more are expected to deposit instruments of ratifications during the summit, indicating that things are going in the right direction.

“When we look at the historical trend, it takes five years for the AU legal instruments to enter into force. The AfCFTA has been an exception. We opened for signature on the 21st March 2018 and in the period of one year, one month, one week, and one day, we got the minimum 22 ratifications required for it to enter into force. This shows the strong political commitment of member states and governments have towards this agreement. So, we are confident that we are moving in the right direction and we are taking step,” he said.

The main objectives of the AfCFTA are to create a single continental market for goods and services, with free movement of business persons and investments, and thus pave the way for accelerating the establishment of the Customs Union.

It will also expand intra-African trade through better harmonisation and coordination of trade liberalisation and facilitation and instruments across the RECs (regional economic communities) and across Africa in general.

The AfCFTA is also expected to enhance competitiveness at the industry and enterprise level through exploitation of opportunities for scale production, continental market access and better reallocation of resources.

The AfCFTA will bring together all 55 AU member states, covering a market of more than 1.2 billion people, including a growing middle class, and a combined gross domestic product (GDP) of more than US$3.4 trillion.

In terms of numbers of participating countries, the AfCFTA will be the world’s largest free trade area since the formation of the World Trade Organisation.

Gender Mainstreaming in AfCFTA National Strategies: Why it Matters for the ...
Scroll to top