In order to support the implementation processes of the African Continental Free Trade Area agreement, Regional Economic Communities (RECs) need to make informed choices about how to reap the benefits presented by the agreement, while at the same time managing the challenges that may be encountered in the course of the implementation.

Wamkele Mene, Secretary-General of the AfCFTA Secretariat, stressed this Tuesday, June 7, on the occasion of the second coordination meeting of the CEOs of RECs, on the implementation of the AfCFTA held at the EAC Headquarters, in Arusha, Tanzania.

The meeting sought to take stock of the progress made since the last meeting in Accra in 2021. The role of the continent’s eight RECs is critical especially as the latter are building blocks for the AfCFTA. Mene said the implementation of the AfCFTA will likely influence future trade policies of theRECs.

“In this regard, effective collaboration between the RECs and the AfCFTA Secretariat is necessary to ensure that the AfCFTA outcomes are consistent with regional advancements in trade integration made thus far and the projections for the future,” Mene said. “Therefore, the coordination meetings offer us an opportunity to listen to one another, to better understand our areas of difference, and to work together to build consensus around common positions critical to our success at creating an African Economic Community.”

African leaders mandated the AfCFTA Secretariat, the African Union Commission, and the RECs to develop a framework of collaboration to enhance complementarity, synergies, and alignment of programmes and activities to facilitate the effective implementation of the AfCFTA. 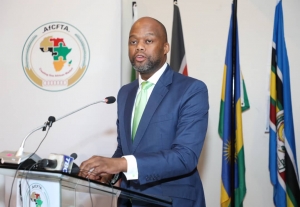 The negotiation of the AfCFTA is now in phase two which covers investments, intellectual property rights, women and youth in Trade competition policy and digital trade. It is Mene&#39;s strong conviction that by agreeing on a workable framework which will strengthen the interdependence of RECs on the one hand, and strengthen the cooperation between RECs and the AfCFTA Secretariat on the other hand, “we will be taking steps critical to the success of the AfCFTA.”

“We have already received instructions from the Assembly of Heads of State and Government of the African Union to take all necessary steps to ensure the effective implementation of the AfCFTA, including facilitating commercially meaningful flow of goods and services under the AfCFTA preferential regime, across the continent. We were also instructed to develop a coordinated approach to the implementation of the AfCFTA Agreement, with the existing RECs as building blocks.”

Peter Mathuki, the EAC Secretary-General, noted that Africa is one of the world’s fastest-growing economies, but trade in goods and services accounts for an estimated 3% of global exports and imports on average. As noted, the share of Intra African trade remains low: on average, 13% for intra-imports and 20% for intra-exports, while ExtraAfrican trade accounts for more than 80% of the total trade. Africa’s exports to the rest of the world consist of raw materials, such as oil, gas, minerals, and agricultural commodities, with little to no value addition.

Mathuki said: “There are many reasons why intra-Africa trade is low; these include differences in trade regimes (8 AU recognised RECs), inadequacies of trade-related infrastructure (poor intermodal connectivity), trade finance and trade information.

“Other constraints are customs, administrative and technical barriers, limited productive capacity, lack of factor market integration and inadequate focus on internal market issues.” With a market of around 1.3 billion consumers and a GDP of $ 3.4 trillion, Mathuki reiterated, AfCFTA will unlock many opportunities in the continent and redesign the architectural framework of its economic systems.

“The eight AU recognised RECs are the official pillars of the African Economic Community (AEC) set out in the Abuja Treaty establishing the AEC. The RECs play a critical role in coordinating and submitting REC tariff offers, schedules, and commitments on trade in services and are fully involved in negotiations on outstanding issues,”

Mathuki said. “Active engagement and input from the private sector and interest groups at the national and
REC level are needed to shape the AfCFTA trade regime and resolve challenges ahead.” Amb. Liberata Mulamula, Tanzania&#39;s Minister of Foreign Affairs, said her country commends the initiative of establishing collaboration between the AfCFTA and RECs towards implementation of the AfCFTA Agreement.

“Tanzania as a member of EAC Customs Union has ratified the AfCFTA agreement and is also a member of SADC and EAC. In order to have a meaningful implementation of the agreement, the United Republic of Tanzania needs to align its participation in the AfCFTA to that of the RECs as its member.”

Published By :- The New Times